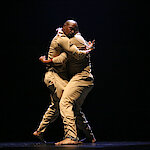 The former prison island Robben Island serves as inspiration for the production of Dark Cell. The work draws on the stories of the political prisoners imprisoned there until 1991 and speaks of the psychological cruelties of being imprisoned. With visually powerful images - inspired by the barren prison cells on Robben Island - Broken Borders Arts Project not only pays tribute to and commemorates South Africa's history but is also situating the country's current social conditions and the postcolonial subjectivities of its citizens in the context of the past.